The summer beer release schedule has been in overdrive lately. Today's round-up is just from the busy brewers of Dublin and its periphery.

None busier than Rascals lately, with the pilot kit at full tilt, as well as several bigger releases, and their taproom the most convenient place to find them.

Born Sippy answers the need for a house lager, though I can't say I wasn't disappointed they didn't bring their magnificent Rain Czech back. Unfiltered, says the menu, and yet it's a very clear pale yellow. Dry hopping with Mandarina Bavaria has given it an unorthodox amount of fruit flavour, sweet peach and mango more than mandarins, I thought. There's not much under this: I suspect the base lager is a bit bland. The brewery claims it's in a Bavarian style but it lacks the big fluffy malt softness that I regard as the helles hallmark. Crispness and bitterness are missing too. Despite these quibbles, it gets the job done: properly refreshing; clean and characterful; just like a house lager should be. Cans are also available if you can't make it to HQ.

An elaborate witbier follows. Smooth & Witty has added orange, chamomile and honey. Sugar bomb? Actually, no. The honey flavour leaps out, but it's not sickly or sticky, more floral and herbal. The chamomile brings a balmy bitterness, mellowed by the soft wheat of the underlying beer. The ABV is a modest 4.7% making for easy drinking, and while it's complex, the flavour isn't busy, staying balanced and harmonious. This is a delicately perfumed take on the wit style which pulls some interesting tricks without losing sight of its roots. I approve.

The Boss is a double IPA of 8.2% ABV, opaque orange and big on super-fresh dank. There's a tropical hit at the front: mango and pineapple, then the spiky herbal grass on a thick resin base. That thickness is a big feature: the whole thing is dense and chewy, the body aided by a slightly gritty yeast fuzz, but not one that gets in the way of the hops. And yet it's not hot or soupy, partly thanks to the invigorating low temperatures they serve their beer at, but also because of an almost astringent dryness in the finish, of the sort usually found in much stronger hop bombs. Overall it's a monster of balance: banging out the hops, piling in the booze, but staying clean and very drinkable. Get it while it's fresh.

Despite my diligence I thought I'd missed their Dubliner Weisse so was pleased to find it at their tap-takeover in The Big Romance last Thursday. It was my first visit to Dublin's height-of-cool hangout for beer, vinyl and toasties. Far from a traditional Berliner weisse, this beer is 4.7% ABV and brewed with added raspberry, lactose and vanilla. It is, therefore, not sour: showing just a smooth tang on the finish. Before that it's a riot of candy fruit: cherry lips and Refresher chews, the sweetness building to a jammy finish with an almost sugary crunch. I managed a whole pint but it was starting to get a little cloying by the finish.

On the day it was released another brewery produced a very different beer with the exact same name. Third Circle's Dubliner Weisse is a straighter sort of Berliner. At least I think it is: I got a blast of lemon zest from the first sip, though the Citra hops may have something to do with that. Behind this there's an intense stony dryness; a kind of cement grit I associate with lambic beers from De Troch in particular. This is definitely a beer of two halves: one I enjoyed and one I didn't. At just 3.8% ABV it is refreshing and quenches the thirst, which is what I was after, but that harsh mineral finish rubbed me up the wrong way. I understand it's a one-off, thus solving the naming issue, so if you want to compare notes with me, try it soon.

Sibling brand Stone Barrel have had their Slammer nano IPA on the market for a while but I only recently got round to trying it. I was thirsty so wasn't too bothered about the murky appearance. The aroma was enticing: ripe mandarin and a touch of peppery spice. It's the latter that forms the main part of the flavour: a mix of white pepper and nutmeg -- not what you might expect from an IPA. Behind it is a serious bitter dankness, all steaming grass cuttings and dark boiled spinach. Fruit, mostly grapefruit, plays a very minor third-level role in all this. The texture is light rather than watery, and it achieved the task I set it: the quenching of a thirst. Yes I think it would be a better beer if cleaner and clearer, but I would definitely be happy to slam a few of these in a row.

Returning to drinking at the source, The Porterhouse staged a grand launch event for the new(ish) brewery last month. With it came two brand new releases, further signs of this veteran keeping up with current beer trends. 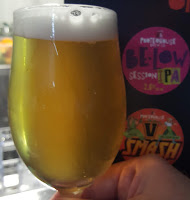 First up is the session IPA Be.Low, at 3.6% ABV. It's quite a pithy and bitter job; dry with a powdered chalky finish. I found it a little severe for session drinking, and dare I say not very modern: take that how you will. Slow sipping gave time for some fruit esters to emerge as it warmed but it's still not great. Porterhouse representatives have been using the creation of this beer to deflect calls for the return of TSB. It will not do. 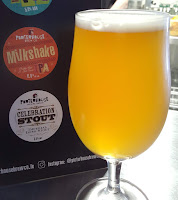 A Milkshake IPA is not something I'd ever have expected to see from the venerable House of Porter, but here we are. It's not a total bandwagon-jumper, eschewing basic strawberry and raspberry for more exotic starfruit and prickly pear. The latter is a favourite flavour of mine, and one I don't think I've encountered in beer before. It's pleasingly dominant too, adding a kooky pink-bubblegum taste. The lactose flavour is muted, appearing only right at the end, though I'm guessing it adds the creamy texture. The substantial 6% ABV probably helps too. The middle has a proper hop bitterness -- a hard and green vegetal note injecting much needed grown-up seriousness. The only real downside for me was the aroma: an off-putting artificial plastic thing. Overall, though, it's a fun addition to the line-up.

The latest seasonal release from JW Sweetman is a nitro red ale, a style which doesn't stir my enthusiasm, though we're promised bonus American hops in this Washington Red. It's red all right, a gleaming shade of copper. Though the flavour is muted by the cold nitrogen, it has a decent amount of fruit character, predominantly strawberry and red apple, leading to quite a hard grapefruit bitterness in the finish. Between the two sides there is enough going on to hold one's attention for the duration of a pint, while the smoothness ensures easy drinking. It won't set anyone's world alight, and there's better beer in the core range, but there's absolutely nothing wrong with this, if you must have a nitro red. 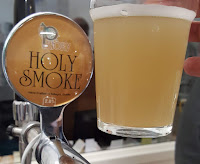 For Indie Beer Week I visited Priory Brewing in Tallaght for their open evening. It's an ambitious set of plans they have for their current near-nano set-up. My main mission was to try their recently released grodziskie, Holy Smoke, a particularly light one at 2.8% ABV. It's a very anaemic yellow but isn't thin in texture nor lacking flavour. The smoke is laid on luxuriously thick, bringing a certain sweetness too, like maple-cured, or even candied, bacon. This fades to leave a refreshingly dry finish, without any of the harshness or acridity you sometimes get from this sort. Overall it's fun, interesting, but still extremely sessionable and refreshing.

For more frivolous sour action there's Hope Limited Edition 15: Pineapple and Passion Fruit Sour. This is dark orange coloured and has a clean tangyness, the sour much more restrained than in, for example, the Third Circle Weisse above. I'm not sure I would have guessed the fruit, though fruit is definitely present. It's not quite as sweet as real pineapple nor as passionfruity as passionfruit tends to be. I might have guessed mango or guava instead. It's good, though. Nicely balanced between the fruit and the tang, with neither dominating. 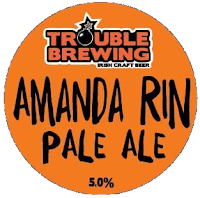 More citrus? How about a new one from honorary Dublin brewery Trouble? Amanda Rin is a pale ale with mandarin in it. The bitterness is very low, and here the fruit brings a kind of floral perfume vibe: lavender and Turkish delight; chew sweets and Parma Violets. Orangeade too, of course, or even Tanora. I'm guessing this is designed to be easy-going summer drinking and it succeeds at that, although the ABV is a little high at 5%. Subtle and complex don't apply here; enjoyable does, however.

That's it for today. The backlog-clearance of Irish beers will continue through the week.
The Beer Nut at 8:54 am
Share